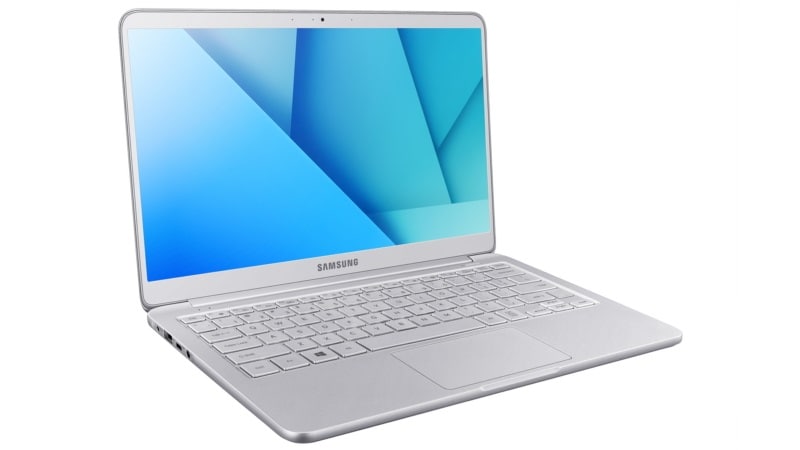 Samsung launched its Notebook 9 laptop lineup at its pre-CES 2016 event in January earlier this year. Now the South Korean company has revamped its Notebook 9 laptop lineup with a sleek and lightweight design that makes the 13.3-inch variant, which weighs around 810 grams, the lightest laptop of its category in the market, as per the company’s claims.

Both the 13.3-inch and 15-inch laptops have been further updated with a fingerprint scanner for improved security, the company said in its release. The laptops come with a support for Windows Hello, which allows for a secure sign in with a single touch, without the need of typing the password, it said.

The full-HD display on Samsung Notebook 9 laptops reclines up to 180-degrees to make it easier to share presentations with co-workers and features a thin bezel edge-to-edge design, Samsung said in its release. Regarding the durability on the laptops, Samsung said, “With a sleek single shell structure, and Micro Arc Oxidation (MAO) Rigidity technology, the Notebook 9 features added integrity, resiliency, and thermal and shock resistance.”

Interestingly, the display on the Samsung Notebook 9 laptops comes with a support for high dynamic range (HDR). In terms of connectivity features, the laptops come with PC Message and PC Gallery that allow users to share files, messages, and photos.

The Samsung Notebook 9 laptops come with USB Type-C ports for charging and the support for adaptive fast charge allows users to fully recharge their laptops in 80 minutes, as per Samsung. The company claims that the battery life on Notebook 9 laptops lasts for around seven hours on a single charge.

Samsung has not provided the pricing and availability details for the new Notebook 9 laptops as of now.